When integrating a Mapbox studio map into a WikiMapping project, I was asked, “There’s a store there now. Can you use newer imagery?”  And I was given a MrSID file with the newer image.

The problem I faced

A google search for MrSIDbrought me to the Library of Congress, Lizard Tech and other outdated references. 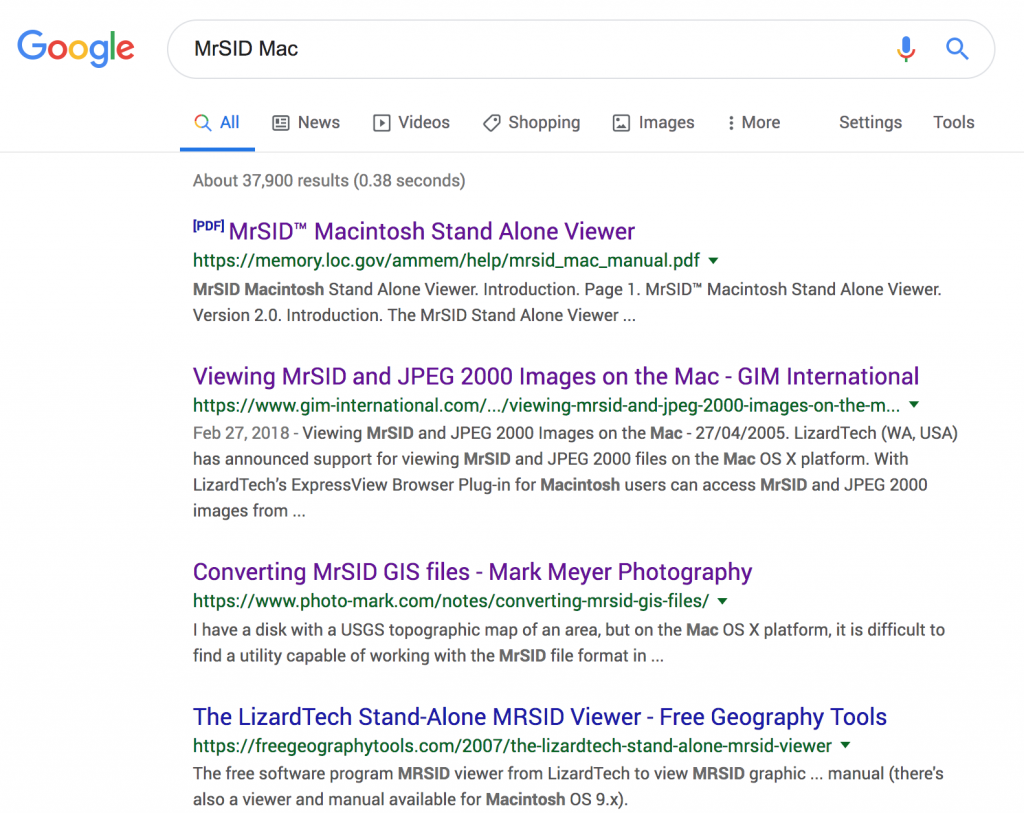 SquishPic is what I needed

Extensis now owns the MrSID format.  I wrote to customer support, and they pointed me to SquishPic.  SquishPic will decompress a MrSID file to jpg, png and tif.  The tif is actually downloaded as a geotif even though the suffix is .tif. This is what I needed.

SquishPic can convert MrSID files to GeoTIFF files and it is available for Mac OS.

The help docs are here.

I received 24 aerial photos in MrSID format that collectively would expand to 6 gb as a tif.  Not wanting to deal with such large files, I converted all of the MrSID files to jpg. But since there was no world file associated with the results, I ended up converting all of the files to TIF anyway.

The tifs opened fine in QGIS and tiles together as I needed them to.

In QGIS, I merged all of the images, reprojected them to web mercator.  The file was too big to deal with, and the process was cumbersome.

So, I decided not to continue on this path.

So here’s what I did

The project could get by using just one of the 24 geotifs.  So, in studio.mapbox.com, I simply dragged the geotif into the uploader and placed it over the existing satellite imagery.

There’s a slight difference in the map tiles, but the data is correct.

The first problem I had was to convert a MrSID file to a Geotif.

Google searches didn’t lead me in a direct path to the answer because the results returned were based on an algorithm that brought up outdated answers.  The old MrSID program promoted by the Library of Congress and others doesn’t work on current Mac operating systems. Finally, I saw that Extensis owns the MrSID format.  Not finding the solution, I asked for help directly from Extensis.  They pointed me to the solution.

The next problem was that I thought I needed to create raster maptiles that could be served up.  This was possible but would take a very long time due to the amount of data.  Because this wasn’t feasible, I abandoned this approach after a couple of hours.

And the solution was to import only the most important raster image into studio.mapbox.com as a tileset and then place that tileset into an existing satellite style.

The result worked as needed and is shown here.  Right below the letters “er” in the word “Intersection” you can see the difference in the imagery, and I think the result is very good.