This shows how to Create a water layer in QGIS using Open Street Map data using Quick OSM. If you’ve ever struggled with displaying water, I hope you will find the following process helpful.

QGIS 3.6, and an internet connection. I’m using a MacBook from 2015. The following plugins should be activated:

When to use this approach

I use this approach when I need large scale OSM data for a specific area and haven’t downloaded a larger dataset from Geofabrik. It’s always a good practice to cross check data sources to make sure you’re not making a crazy error.

QuickOSM shows up in the Vector Menu.  It creates and runs queries using Overpass queries.  Through practice, you become familiar with the open street map schema, but here are the queries I run.

Set the Key, the Value and the Extent.  More info can be found on the OSM Wiki. 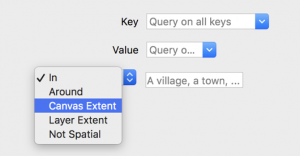 The coastline feature is multiple line segments and should be converted into a polygon to stylize the area.  It often portrays rivers that run into the ocean.

Use as a water body.

Use as a land layer above water

No useful attributes, but fills in gaps between natural_water areas.

Processing the data in QGIS

You need to be able to distinguish between vector layer types, so it makes sense to add an “_a” at the end of the areas you will want to merge in the next step.  The coastline polygon layer can be labeled islands.

I keep the islands separate because they are land, not water.

Now that you’re done. Next Steps

You should now have a single water area layer with attributes you can query. For labeling rivers, you may want linear river data so that you can place a label in the center of the river.

There will be islands in the water layer.  These can be selected with a query and copied to the islands layer.